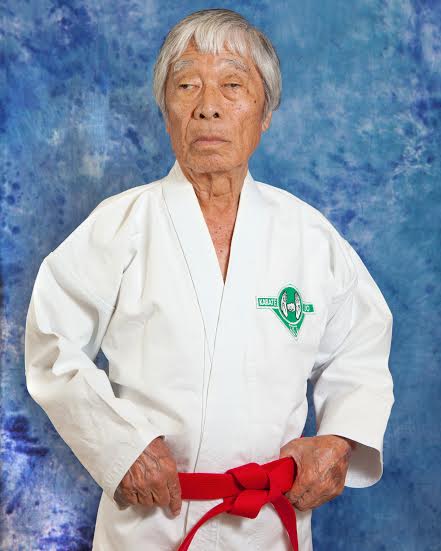 Shihan was born in Honolulu, Hawaii on June 18, 1932. His father, Hikoki Nishioka, and his mother, Kiyo Nishioka, were both from Kumamoto Prefecture, in Japan, and immigrated to Hawaii in 1907.

At a very early age, Nishioka Shihan began learning jujitsu from his father; in 1940, at the age of nine, he began jujitsu and judo studies with Professor Seishiro Okazaki. Professor Okazaki was the founder of the American Jujitsu Institute in Hawaii and the founder of Danzan-ryu (Danzan-style).

Walter Nishioka’s Air Force basic training was at Lackland Air Force Base in San Antonio, Texas. After basic training, he was transferred to Lowry Air Force Base in Colorado. While at Lowry Air Force Base, he learned to be an aerial gunner on the B-29 Superfortress Bomber and the B-26 Marauder Dive Bomber. After completing gunnery school, he was transferred to Walker Air Force Base in the Strategic Air Command (SAC) at Roswell, New Mexico. While Waiting for deployment to Korea, Shihan attended a judo exhibition at Walker Air Force Base. The Master Sergeant in charge of the demonstration learned of Shihan’s skills in judo and jujitsu and had Shihan’s orders changed so he could help him train other airmen. Instead of deployment to active duty in Korea, Corporal Walter Nishioka was assigned to the training cadre of the Survival Training Course and Flight Crew Combat Course. Eventually, the training programs incorporated judo, aikido, and karate into the courses. This led to the legendary 1953 SAC tour where 10 Japanese martial artists were invited to a three month tour of the SAC Air Force bases to teach their disciplines. Corporal Nishioka was assigned to be an interpreter for the 8th Air Force Base training; his military discharge came in September of 1955.

As a civilian, Walter Nishioka returned to Hawaii with a vast knowledge of martial arts and the experience and ability to teach it. Despite his busy schedule attending night courses in the field of Business Administration at the University of Hawaii, he made time to train and teach his students in his early years. Nishioka Shihan would continue to make many trips to Japan where the instructors he met during the Strategic Air Command tour invited him to visit and train at their schools.

After the Korean War, a few servicemen from Hawaii went to Japan and resided at the Kodokan Judo dormitories to further their judo studies. Shihan knew these servicemen and they helped direct him to other schools beyond his exposure while with the Strategic Air Command tour. He studied with various sensei (instructors) and senpai (seniors) from different styles such as Shotokan, Shito-ryu, and Goju-ryu; this is how Shihan discovered Wado-ryu and its founder, Hironori Otsuka Shihan. Otsuka Shihan saw Wado-ryu primarily as a spiritual discipline where “Ten-Chi” Jin, Ri-Do (Heaven-Earth-Man, Principal-Way) was a union to be respected and sought through discipline and dedication. This philosophy inspired Nishioka Shihan and, as a dedication to Otsuka Shihan, he created the two kata (forms and ways of combat), Tenchi and Tian-Di-Dai.

Throughout the years, Nishioka Shihan continued to travel back and forth from Tokyo to Yokohama to continue his training under Kawaguchi Sensei and Otsuka Shihan. The training Nishioka Shiaha did was very intense and lasted all day long; every day of the week. During his free time from Wado-ryu and judo training, he would attend and train in other styles of martial arts to expand his experience and knowledge.

Nishioka Shihan opened a karate school in Honolulu, Hawai’i in 1958 at the Moilili Community Center that was called Hawaii Karate Goshin-Kai. Goshin is interpreted as “self-preservation,” Kai is interpreted as “club” or “association.” Loosely interpreted, Goshin-Kai means “Self-Preservation Club.” Shortly thereafter, the school name became known as the All Japan Karate League, Hawaii Wado-Ryu Branch Headquarters. Goshin-Kai became the Hawaiian representative for Japan’s Wado-Ryu. Walter Nishioka received a certificate from Otsuka Shihan naming him the Chief Instructor of the All Japan Karate League in Hawaii;
this is when Walter Nishioka received the title of “Shihan.”

Otsuka Shihan suggested to Nishioka Shihan that he should be credited with the propagation of karate in the United States and should consider creating his own school. When Nishioka Shihan started his own style in 1962, he relinquished all of his black belt ranks in the styles in which he had trained; judo, jujitsu, and karate; he “became” the school, and as a result, the source from which all rank in the new school comes forth. At the same time, Nishioka Shihan traveled back and forth to Japan to further his martial arts studies, which included stick and bo techniques with Otsuka Shihan and Kawaguchi Sensei.

Other schools offered Nishioka Shihan higher rankings but Nishioka Shihan refused. His goal was not ranking and was instead to gain more extensive knowledge in the field of martial arts.

The new school created after receiving Otsuka Shihan’s blessing assumed the name Statewide Karate Association in 1963 and shortly thereafter was changed to Statewide Karate League (SKL). SKL continued as the school’s name for 23 years, during that time bylaws and operating manuals were created. A Board of Governors was also created to help manage the school. By 1986, many dojos were started on the mainland so a change in the name was needed. Nishioka Shihan elected to change the name to International Karate League to accomodate future growth of the school.

The International Karate League (Kokusai Karate Renmei) is considered a modified Shorin-ryu. Its Shorin-ryu roots are primarily Wado-ryu with some Shotokan and Shito-ryu influences. It is modified with influences from Nishioka Shihan’s training in Judo, Jujitsu, Aikido, White Crane Kung Fu, Goju-ryu, and his background in military self-defense. Nishioka Shihan applied his outlook and experiences from his military and ongoing travels to the Far East in the creation of this new style.

Nishioka Shihan, in his very modest and humble ways, tutored his senior leaders and upcoming yudanshas (black belts) to practice and lead by the IKL motto in the best interest of our school and not for personal gain.

Because of his philosophy and leadership, the International Karate League is growing year by year and is one of the most unified Karate organizations today.

By being patient and striving for perfection will I become physically, mentally, and spiritually strong.